I wish I could start this post by saying the painting was all done and the place looks great, but we’ve only scratched the surface of what needs to be done.  But at least we have progress!  I spent most of last week continuing to spackle; it feels like that’s all I’ve been doing for days on end.  I know I had said I hoped to be ready for paint in the kitchen and bathroom by the weekend, but now I can see that was completely unrealistic.  Some tricky spots need to be spackled and sanded multiple times, and I’ve been waiting one day for it to set and dry in between applications.  Most of the stubborn spots are located above the windows and the sliding glass door, like this spot here.

This is what it looks like underneath where we pulled the trim off above the sliding glass door.  Some of the wall is crumbling at awkward points, so I’m not getting too crazy trying to be accurate with the spackling.  After all, I may need to replace the door to fix the wood rot problem.  Luckily, I have heard from the association about that issue.  The roofing on all the buildings in the complex is in the process of being replaced, and the board agreed to send the roofing company to repair the damage, and to pick up the tab for it as well.  Score!  I haven’t heard from the company itself yet, but I’ll be sure to give an update when I do.

Applying painter’s tape all over the condo has been the next step, and although it takes a while, it’s been my favorite job so far.  Probably because it’s mindless and easy.  However, taping does really highlight where the builders had issues in the construction of the condo.  For example, at first glance, the kitchen counter looks totally normal and pretty much standard in terms of installation.  Applying the tape from left to right, I noticed that one side is perfectly flush with the wall, but the other end it’s at least 3/4 of an inch away, and the gap has been filled in with silicone caulk.  Pretty cheesy (and lazy) if you ask me! 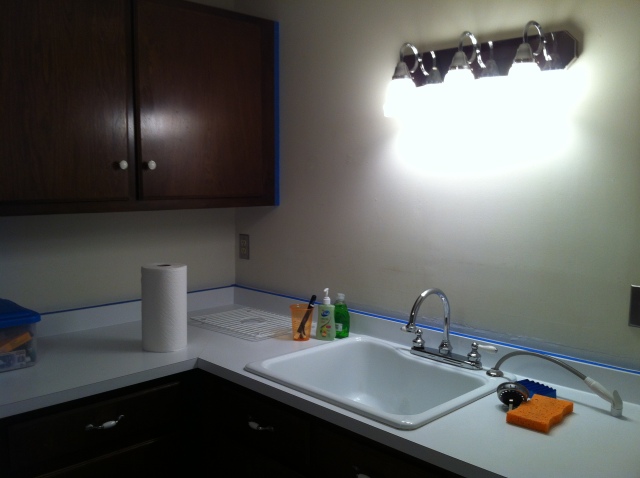 Now, especially with the tape on it, it’s all I can see when I look at it!  Hopefully putting paint on the walls won’t make it any more noticeable.  By the way, the kitchen looks spotless in that photo.  Thanks to my aunt for scrubbing the place down!

As the title of this post might suggest, we have actually been able to put paint on a surface.  We started with the ceilings, which (unfortunately) are popcorn ceilings.  Apparently popcorn ceilings were all the rage in the ’70s and ’80s, but now they’re just outdated and kind of sad-looking.  Not to mention, early spray-on varieties of popcorn ceiling contained asbestos, before it became illegal in 1978.  As luck would have it, my complex was built in 1977, which means it’s highly likely that there is asbestos in the popcorn formula.  It sounds like a big deal, but it’s not a problem unless you try to go about removing it.  So, in all likelihood, the popcorn is here to stay.  Almost every single person I have been turning to for handywork help advised me not to even think about painting the ceilings, because the popcorn texture tends to fall off, sticks to your roller, and becomes a huge hassle.  But I’m on a budget here, people, and I wasn’t going to hire some fancy painting company to come spray paint my ceilings.  Plus, once the popcorn has been painted once, you really don’t have to worry about the texture coming off; it’s pretty much a done deal.  As I predicted, we have had no problems with the ceiling so far.

Since my mother is the resident expert on painting this kind of ceiling (we have popcorn ceilings in our house now), she is heading this operation, and has done an amazing job so far.  We started by painting just the edges with a regular paintbrush, using Behr Flat Ceiling paint in Ultra Pure White.  Just look at that color difference!  My ceilings are very low to begin with, so I bought the whitest white they had, hoping it might reflect more light and make the rooms look a little bigger.  Just as a disclaimer, the taping job I did in that picture looks horrible, but I swear there’s a wire coming out of that hole that made it a particularly difficult spot.

Here are the painting supplies I’ve used so far:

I’ll keep this list updated as the painting continues!